Path of Titans Wiki
Register
Don't have an account?
Sign In
Advertisement
in: Playable, Terrestrial, Herbivores,
and 3 more

Albertaceratops has two horns above on its brow, and two curled horns towards the top of its frill, distinguishing it from the other ceratopsians found in-game. It has multiple rows of scutes running down its back and along its hips, creating a unique profile from behind. Albertaceratops is more heavily built than Styracosaurus making it tougher but slower. When running, Albertaceratops will shuffle, instead of galloping like most other ceratopsians in Path of Titans.

These are the abilities Albertaceratops can use for combat.

Albertaceratops (meaning "Alberta horned face") was a genus of centrosaurine ceratopsid from the Upper Cretaceous Oldman Formation of Alberta, Canada. They are herbivorous and thought to have a varied diet of low vegetation, and have been been speculated to eat small amounts of meat or bones like many other primary herbivores in modern times. This has earned them, and other ceratopsids, the nickname 'pigs of the cretaceous'. Albertaceratops had an odd set of head ornaments compared to most ceratopsids. It has two brow horns not too unlike that of Triceratops, however it also posses a nose ridge similar to Pachyrhinosaurus. It also posses two horns at the top of its frill that curl forward.

List of all Albertaceratops skins found in Path of Titans. 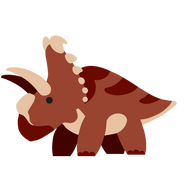