A. fragilis
A. europaeus
A. jimmadseni

Allosaurus is a well-rounded but large terrestiral carnivore that hunts in small packs.

In Path of Titans, the Allosaurus has three body types: fragilis (standard), jimmadseni (skinny), and europaeus (stout). The developers have mentioned on several occasions in streams and youtube videos they want Allosaurus to be an all-around mid-sized carnivore. They have also gone on record to state that they intend for Allosaurus to have a grappling attack/ability used to slow and or hold down opponents.

The Allosaurus is a genus of carnivorous theropod dinosaur that lived 155 to 145 million years ago during the Late Jurassic period (Kimmeridgian to late Tithonian). The name "Allosaurus" means "different lizard" alluding to its unique concave vertebrae (at the time of its discovery). It is derived from the Greek allos ("different, other") and sauros ("lizard / generic reptile"). The first fossil remains that could definitively be ascribed to this genus were described in 1877 by paleontologist Othniel Charles Marsh. As one of the first well-known theropod dinosaurs, it has long attracted attention outside of paleontological circles. Allosaurus belongs to the family Allosauridae, which is apart of the larger Allosauria superfamily which includes the Carcharodontosauridae and Neovenatoridae families. Allosaurus has evidence which suggests it hunted Stegosaurus and various other suaropods in the Morrison Formation. 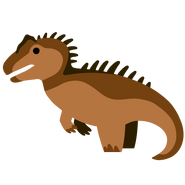