Path of Titans has various means of communication in order for players to speak and interact with each other in the easiest way possible.

Currently, players can communicate through Text Chat and Emotes, though Voice Chat is confirmed for future development.

There are 3 types of text chat in-game: (Global, Group, and Local)

A chat that is only viable/usable to members of a group. It’s mainly used for private communication between herd/pack-mates.

This chat is visible to all players on the server. It is used to find groups, get waystoned, or have general chatter with other people on the server. 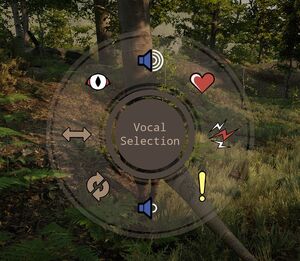 The player may use the Vocal Wheel to perform emotes in order to interact with players around them.

This call is typically the loudest call, it is a neutral (usually has no communicative purpose behind it) but sometimes it is used to signal where a pack member is and sometimes is used to give away locations.

This call is typically used to indicate you are friendly or mean no harm.

This call is typically used to convey aggression and threaten smaller animals.

This call is typically used to alert your group to a danger.

Other calls can vary between scratching, looking around and other miscellaneous actions. Some dinosaurs have entirely unique animations that only their species can do, such as Ceratosaurus' head bobbing.