Path of Titans Wiki
Register
Don't have an account?
Sign In
Advertisement
in: Playable, Terrestrial, Carnivores,
and 2 more

Daspletosaurus is a large sized tyrannosaurid carnivore found in Path of Titans. Daspletosaurus is a terrestrial dinosaur that takes on an mainly offensive playstyle, focusing on inflicting damage with its multiple head slot abilities during combat.

As an apex predator, Daspletosaurus was at the top of the food chain, probably preying on large dinosaurs like the ceratopsid Centrosaurus and the hadrosaur Hypacrosaurus. In some areas, Daspletosaurus coexisted with another tyrannosaurid, Gorgosaurus, though there is some evidence of niche differentiation between the two. While Daspletosaurus fossils are not as common than other tyrannosaurid fossils, the available specimens allow some analysis of the biology of these animals, including social behavior, diet and life history.

Daspletosaurus is a large-sized carnivore with a powerful jaw for biting down with force. It has long powerful legs to make up for its small and weak arms. Daspletosaurus is considered surprisingly fast for its size as its trotting speed can outpace many playables in Path of Titans.

While very large by the standard of modern predators, Daspletosaurus was not the largest tyrannosaurid. Adults could reach a length of 8–9 meters (26–30 ft) from snout to tail. Mass estimates have centered on 2.5 metric tons (2.8 short tons), but have ranged between 1.8 and 3.8 metric tons (2.0 and 4.2 short tons).

Daspletosaurus shared the same body form as other tyrannosaurids, with a short, S-shaped neck supporting the massive skull. It walked on its two thick hindlimbs, which ended in four-toed feet, although the first digit (the hallux) did not contact the ground. In contrast, the forelimbs were extremely small and bore only two digits, although Daspletosaurus had the longest forelimbs in proportion to body size of any tyrannosaurid. A long, heavy tail served as a counterweight to the head and torso, with the center of gravity over the hips.

These are the abilities Daspletosaurus can use for combat.

List of all Daspletosaurus skins found in Path of Titans.

These skins were available for a limited time during the Path of Titans crowdfunding campaign. 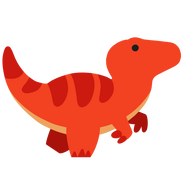