Deinonychus is a small sized dromaeosaurid carnivore in Path of Titans. Deinonychus is a terrestrial dinosaur that takes on a supportive scout playstyle, focusing on supporting teammates and using its speed to spot enemies and items far ahead.

Deinonychus is a small feathered raptor that sports high speed, quick turning, high maneuverability, and a high jump height. It will stretch its winged arms out to better balance while turning, and uses its large fanned tail as a display structure. This tiny predator will have to use teamwork in order to take down most forms of prey. Even the smallest AI creatures such as lizards and turtles are nearly as large as it, and will provide a formidable opponent for the Deinonychus. Though, the Deinonychus is extremely fast for its size, and is able to manoeuvre very well while running. Catching one of these will be difficult for any larger dinosaur, as this raptor can quickly dart into bushes and lose nearly any pursuant.

These are the abilities Deinonychus can use for combat.

Deinonychus is a genus of feathered carnivorous theropod dinosaur that was described by John H. Ostrom in 1969. Deinonychus has one described species, Deinonychus antirrhopus. This species lived during the early Cretaceous Period, about 115–108 million years ago (from the mid-Aptian to early Albian stages). Fossils have been recovered from the U.S. states of Montana, Utah, Wyoming, and Oklahoma, in rocks of the Cloverly Formation, Cedar Mountain Formation, and Antlers Formation, though teeth that may belong to Deinonychus have been found much farther east in Maryland. Deinonychus belongs to the clade Eudromaeosauria which is apart of the family Dromaeosauridae.

Deinonychus means "terrible claw" in Greek, referring to its sickle claw which was commonplace among the dromaeosaurids. The species name antirrhopus means "counterbalancing" in Greek and is referring to this purpose as a likely one for the stiff tail of Deinonychus.

Deinonychus is perhaps best known for starting the Dinosaur Renaissance, a paradigm shift in the overall biology of dinosaurs. John Ostrom's study of Deinonychus challenged the idea that dinosaurs were dim-witted, cold blooded animals, and instead showed that all, if not most, were active and warm-blooded. He noted the horizontal posture, ratite-like vertebrae, and the enlarged sickle claws on the feet, suggesting that Deinonychus was an active predator.

As is considered to be the case for most dromaeosaurids, Deinonychus probably used a method called RPR (Raptor Prey Restraint) to subdue prey, comparable to that of modern day acciptrid birds of prey, a group that contains hawks, eagles, kites, etc. This involves pinning down and gripping the prey with its sickle claw, using its weight to keep the prey from escaping. Deinonychus would then feed on the animal while it was alive, like acciptrids, and would continue to when the prey died of blood loss and organ failure. It has also been suggested that the remiges (arm feathers) of Deinonychus could have been used as flapping stabilizers in order to keep its balance while pinning down prey.

Ostrom originally speculated that Deinonychus was a speedy animal because of its similarities to modern ratites, however, at the time, a full leg was not discovered yet. When the first complete leg of Deinonychus was discovered, Ostrom noted that the femur (thigh bone) to tibia (shin bone) ratio was not characteristic of a fast animal, so while Deinonychus was not a slow animal, it certainly wasn't as fast as some other, more cursorial dinosaurs such as ornithomimids and ratites.

In the past, Deinonychus has been suggested to be able to climb trees. Currently the consensus today is that juveniles and sub-adults have a stronger claw curvature as well as longer forelimbs, showing that they were probably able to climb on trees based on the hypothesis that Deinonychus used its recurved claws to climb trees. As the animal grew, its claws would have straightened out and it would have become predominantly terrestrial.

Many Deinonychus fossils have been found with the contemporary ornithopod Tenontosaurus. This has spurred a debate into whether dromaeosaurids did hunt in packs, or if this was just a congregation of unaffiliated individuals. In reality, Deinonychus probably wasn't a pack hunter, instead coming in congregations and coincidentally hunting the same prey, fighting over it afterwards, unlike how it is commonly depicted hunting cooperatively together. This is because most modern archosaurs (the group that includes birds and crocodilians) show little evidence of pack-hunting, two exceptions being the Cuban crocodile and Harris hawk, both of which have been observed hunting cooperatively together. Despite this, it is likely that most predatory dinosaurs, such as Deinonychus, did not hunt in packs, or at the very least did not hunt in organized packs like today's wolves, instead mobbing prey in an unorganized manner.

In the Cloverly Formation, Deinonychus coexisted with Acrocanthosaurus, Microvenator, Sauroposeidon, Tenontosaurus, Zephyrosaurus, Sauropelta, Aquilops, and many various species of mammals, fish, and turtles. In the Cedar Mountain Formation, an indeterminate species of Deinonychus was discovered and lived with many ornithopods, ankylosaurs, sauropods, and other kinds of theropods such as other species of dromaeosaurids, the large carnivore Siats, the small tyrannosaur Moros, a large carnosaur similar to Acrocanthosaurus, Falcarius, Geminiraptor, Nedcolbertia, and many other species of reptiles including crocodile relatives, lizards, turtles, as well as fish and mammals. The fauna Deinonychus coexisted with in the Antlers Formation was largely similar to that of the Cloverly Formation.

List of all Deinonychus skins found in Path of Titans. 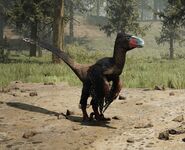 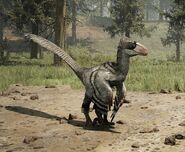 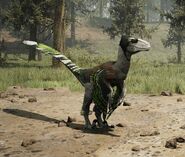 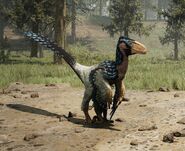 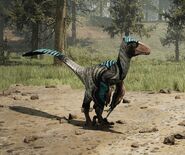 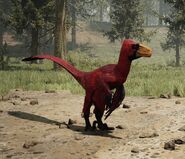 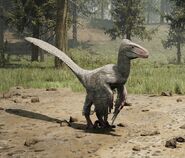 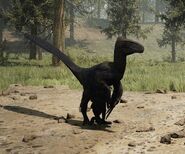 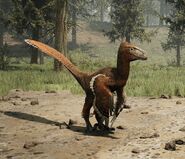 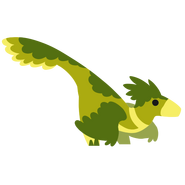