Path of Titans Wiki
Register
Don't have an account?
Sign In
Advertisement
in: Playable, Terrestrial, Herbivores,
and 2 more

I. anglicus
I. bernissartensis
I. galvensis

Iguanodon is a large sized iguanodontian herbivore found in Path of Titans. Iguanodon is a terrestrial dinosaur, and takes on an offensive playstyle that focuses on short bursts of speed and damage.

Iguanodon is one of the larger herbivores possessing two different attacks: A thumb spike jab and a tail swing. Though one of the fastest dinosaurs it has short lasting stamina and quick stamina regen. Not just fast on land, but in the water to and able to keep up with semi-aquatics like Suchomimus for short periods of time. It cannot dive however. Stamina lasts longer in water so is a good travel method against escaping other terrestrial creatures.

These are the abilities Iguanodon can use for combat.

Iguanodon, named in 1825, is a genus of ornithopod dinosaur that existed roughly halfway between the first of the swift bipedal hypsilophodontids of the mid-Jurassic and the duck-billed dinosaurs of the Late Cretaceous. While many species have been classified in the genus Iguanodon, dating from the late Jurassic Period to the early Cretaceous Period of Asia, Europe, and North America, taxonomic revision in the early 21st century has defined Iguanodon to be based on one well-substantiated species: I. bernissartensis, which lived from the late Barremian to the earliest Aptian ages (Early Cretaceous) in Belgium, Spain, Germany, England and possibly elsewhere in Europe, between about 126 and 122 million years ago. Iguanodon were large, bulky herbivores. Distinctive features include large thumb spikes, which were possibly used for defense against predators, combined with long prehensile fifth fingers able to forage for food. It was mainly quadrupedal but sometimes rose on two feet to browse. Iguanodon was also one of the first dinosaurs that were able to chew their food. Iguanodon belongs to the family Iguanodontidae.

List of all Iguanodon skins found in Path of Titans. 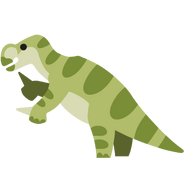