Path of Titans Wiki
Register
Don't have an account?
Sign In
Advertisement
in: Playable, Terrestrial, Carnivores,
and 4 more

The Megalania is a medium-sized venomous carnivore.

Megalania is an ambush hunter. With it being so low to the ground and well camouflaged, it effortlessly hides in foliage and creeps up on unsuspecting prey. Once it is within range, it can burst forward and bite its prey, injecting venom into their wounds. Megalania has a venomous bite that drains stamina of its prey.

Megalania refers to an extinct giant goanna or monitor lizard, recognized as either Megalania prisca or more recently Varanus priscus. They were part of the megafaunal assemblage that inhabited southern Australia during the Pleistocene era. The youngest known fossil remains dated to around 50,000 years ago. The first aboriginal settlers of Australia might have encountered them and been a factor in their extinction. Megalania adults were on average 6 meters long and 600 kg. Megalania belongs to the family Varanidae. 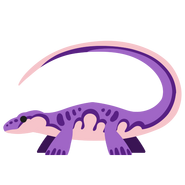