The Stegosaurus is a large herbivore found in Path of Titans. Stegosaurus is a terrestrial dinosaur, and is relatively fast for it's size. It deals large amounts of bleed damage with it's wide sweeping tail swipe.

Stegosaurus is known for it's distinctive row of large flat plates on it's back and 4 large Thagomizers (spines) on it's tail. Being deceptively fast with it's heavy gallop, Stegosaurus is faster than most herbivores it's size. Stegosaurus has a very small head with a large heavy-set body making it a tough animal.

These are the abilities Stegosaurus can use for combat.

Stegosaurus is a genus of herbivorous thyreophoran dinosaur. Fossils of this genus date to the Late Jurassic period, where they are found in Kimmeridgian to early Tithonian aged strata, between 155 and 150 million years ago, in the western United States and Portugal. Of the species that have been classified in the upper Morrison Formation of the western US, only three are universally recognized; S. stenops, S. ungulatus and S. sulcatus. The remains of over 80 individual animals of this genus have been found. Stegosaurus would have lived alongside dinosaurs such as Apatosaurus, Diplodocus, Brachiosaurus, Allosaurus, and Ceratosaurus; the latter two may have preyed on it. Stegosaurus belongs to the family Stegosauridae.

List of all Stegosaurus skins found in Path of Titans.

These skins were available for a limited time during the Path of Titans crowdfunding campaign.

One in a Box 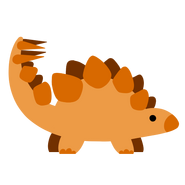